Skip to Main Content
There are two locations in the South of France that served as our chief inspiration when developing the 2021 Outdoor Collection: the group of culturally significant architecture known as Cap Moderne in Roquebrune and La Colombe d’Or Hotel and Restaurant in the small village of Saint-Paul de Vence. The latter is further inland, a bit more discreet and Provençal in lifestyle, while the former is set amidst the picturesque Mediterranean coastline of the French Riviera.

What they have in common, however, is functioning as a gathering place and retreat for artists and creative types throughout history. A place where the likes of Picasso and Le Corbusier could unwind and recharge their creative batteries while enjoying the company of close friends and family. It’s a vibe that many of us are craving—so if you can’t actually go to Europe and experience these places firsthand at the moment, why not bring a touch of them to your own outdoor space?

The collection of architectural landmarks now known as Cap Moderne sits across the bay from Monaco on a rocky finger jutting into the Mediterranean called Cap Martin in Roquebrune, France. The story of two of its most noted buildings, Eileen Gray’s Villa E-1027 and Le Corbusier’s Cabanon, is filled with controversy and scandal, and, only recently, restoration and redemption.

Noted Irish architect and designer Eileen Gray built the modernist Villa E-1027 in 1929. The name is a nod to Gray’s then-partner, French architect Jean Badovici, and combines the alpha-numeric positions of their respective initials. It was her first major architectural work, constructed using modernist principles of both architecture and furniture design—many of which were made popular by Swiss-French architect Le Corbusier. Yet despite the villa’s significance, a series of unfortunate events throughout the decades left it in disrepair.

Gray and Badovici split in 1932 and Badovici inherited E-1027. He often hosted Le Corbusier, who was enamored with the property. Indeed, for decades E-1027 was credited as the work of Badovici and even Le Corbusier more than it was Gray. In the late 1930s and explicitly against Gray’s wishes, Le Corbusier painted large, colorful murals on the home’s walls, which one architectural critic likened to “assert[ing] his dominion, like a urinating dog, over the territory.” (There is at least one documented photo of Le Corbusier painting these murals in the nude, to boot.) 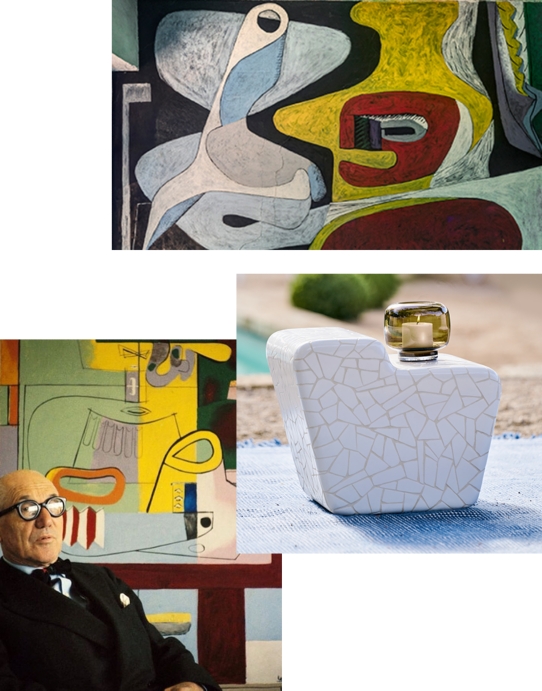 E-1027, the Cabanon and Etoile de Mer create a sort of architectural trifecta, marking a cultural and artistic hotspot that played host not just to Le Corbusier, Jean Badovici and Eileen Gray, but also the likes of Coco Chanel and WB Yeats, who visited over the years.

E-1027 and Gray’s luck continued to decline through the years: the Nazis used it for target practice in World War II and when Gray’s physician acquired the home, he sold all of her original furniture, hosted drug-fueled bacchanals and was murdered on site in 1996. The villa fell into further disrepair, vandalized by squatters and undergoing a controversial restoration/modernization effort before the Cap Moderne Association was established in 2014 to restore the site to its original intent. As Cap Moderne trustee Tim Benton, an art history professor specializing in 20th century architecture, told Metropolis Magazine, “We have taken the position, which is not fashionable in many conservation courses, to reconstruct [that] which had been destroyed to more or less the 1929 situation.”

In fact, Le Corbusier himself had actually attempted to purchase E-1027 but was unsuccessful. Instead, he was able to acquire a pact of land on a coastal path near the villa, where he built his holiday home Cabanon de vacances in 1951. The Cabanon was adjacent to Thomas Rebutato’s restaurant Etoile de Mer, where Le Corbusier dined every day and often congregated with friends and fellow artists. Le Corbusier actually built a connecting door directly from the Cabanon to Étoile de Mer, and later designed and built five “holiday cottages” for Rebutato on the restauranteur’s land.

Together, E-1027, the Cabanon and Etoile de Mer create a sort of architectural trifecta, marking a cultural and artistic hotspot that played host not just to Le Corbusier, Jean Badovici and Eileen Gray, but also the likes of Coco Chanel and WB Yeats, who visited over the years.

Drive an hour or so west along the French coastline and you’ll eventually come across the medieval village Saint-Paul de Vence and La Colombe d’Or, a boutique hotel and restaurant with an impressive private collection of modern art. Whether famous guests like Pablo Picasso and Marc Chagall paid for their stays with paintings or money is a matter of local legend, but the end result is a melange of art that rivals many museums. There’s even an Alexander Calder mobile anchoring the pool.

The hotel and restaurant has attracted a variety of notable visitors throughout its history, including the aforementioned Picasso and Chagall, as well as Henri Matisse, Joan Miró, Alexander Calder and Georges Braque. In the restaurant, traditional Provençal dishes are served under original works by past guests, tangible traces of art history as tantalizing (perhaps even moreso) than the meal itself.

These are the influences that informed the outdoor furniture design of our latest collection: the mingling of modern art with European landscapes, whether you’re on the French Riviera or in the rocky hills of Italy. Modernist design principles, vibrant murals and gatherings with friends and free spirits along the shores of the Mediterranean—perhaps in a Palazzo on the coast of Capri.

You’ll see our interpretation of European industrial design in the frame of a chair. Tonal blue striped pillows evoke the color scheme of the Mediterranean coastline. Vintage-inspired faux rattan juxtaposes with Brutalist concrete lines like a modern building set amid lush natural surroundings. The sleek, modernist Rossi Outdoor Sectional even includes a deliberate nod to France by way of a tiny red, white and blue rope detail. It all comes together to create your very own artists’ retreat and getaway—without actually having to leave your home.